1. Eric continues to be active in community civic groups and school functions, and volunteers his time several organizations within Lyon County

2. It is Sgt. Wallen’s goal to operate the Lyon County Sheriff’s Office as efficiently and effectively as possible while providing the highest level of public safety services.

4. Sgt. Wallen believes in treating all citizens with respect, and will create more opportunities for community interaction with the Sheriff’s Office

5. Sgt. Wallen is one of two supervisors in the Sheriff’s Office who are responsible for the day-to-day activities of the Office.

6. As Sheriff, Eric would work with local schools to have an increased Sheriff’s Office presence and involvement in school events and security.

7. Eric believes that fiscal responsibility is of the highest priority when managing a government agency.  He will continue to seek opportunities to cut costs to the taxpayers without jeopardizing public safety.

9. Sgt. Wallen has been directly involved with many enhancements, striving to keep the Sheriff’s Office up to speed with ever changing challenges:

a. Introduction of mobile computers in the patrol cars

10. Sgt. Wallen is a strong believer in continuing education for law enforcement

a. Has served as a field training officer for new hires

b. Currently manages the field training program for the 911 dispatch center

c. Is currently the defensive tactics instructor for the Sheriff’s Office.

12. Sgt. Wallen maintains a very positive working relationship with the Marshall, Minneota, and Tracy Police Departments.  Eric believes that a collaborative effort between local agencies is of utmost importance. 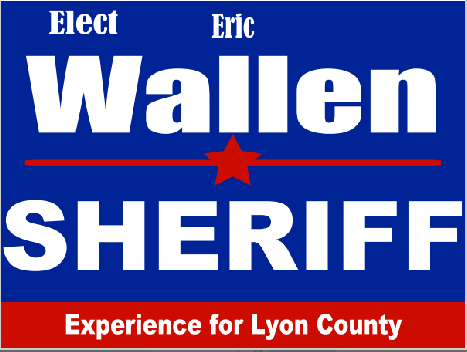 ***With 20 years in law enforcement field, I have come to understand what is necessary to provide the highest level of public service to you, the citizens of Lyon County.  As Sheriff I will foster continuing education for all employees and work to assist them in achieving all educational goals.  I will provide a peer mentoring program to help new deputies familiarize themselves with the law enforcement profession and Lyon County.  I will work hard to foster a positive working environment within the Lyon County Sheriff’s office.  With the foundation of a solid and continuing education, mentorship, and positivity I believe the people of Lyon County will have access to the best public safety workforce in the State of Minnesota.

I welcome anyone to stop at the Sheriff’s Office if you have any questions or concerns that I can assist you with.

Paid for by the candidate on his own behalf.